Hit enter to search or ESC to close
Blog

In ancient Iran, the beginning of each month and year were holy and each month had a specific celebration. These celebrations were held on different days of twelve months. Each month and day carried a name. These names belong to Iranian gods and goddesses. If a month and a day with same names coincided, people would celebrate that day. For instance thirteenth day of month is named god of Tir, its occurrence on month of Tir (Fourth month of Solar year) create Tirgan Festival, and so on for other months.

Tirgan Festival is one of Iran’s ancient festivals. Based on Iranian calendar it is held on thirteenth day of Tir (July 2, 3, or 4) in order to praise dignity and mercy of Tir (Tishtrya) which is god of rain.

Sweeping outdoor areas of the house on the day before the festival was a tradition in past, and on the day of festival they took shower and wore clean and suitable cloths. In addition to performing these ceremonies Zoroastrians read Tishtrya yasht (Kind of Zoroaster prayer) or Khorshid Niayesh (Kind of Zoroaster prayer), “We honor the luminous wise god of Tishtrya.” they repeated for many times. Tishtrya or Tir is the name of a god who helps raining.

Also it is a name of a star, whenever it is seen in the sky, there is an evangel of rain. So we can conclude that pray the god of Tir is one of the reasons for this festival in order not to withhold his mercy and foreordain fertile and pluvial year for the people. After these invocations, they went to streets all together and splashed water on each other happily. This ceremony is also known as “Abrizan” or “Abpashan”. It should be mentioned that other people also made efforts to hold this ceremony as well as Zoroastrians, they splashed water on each other with jubilation at riversides.

An important part of the feast was tying rainbow-colored silk bands on wrists, which were untwined after some days and given to god of wind (Vayu). There is a belief which says that these colored threads are a sign of sky, rainbow, and the wind after the rain which had helped Arash to land his arrow further. As the same way, tying these threads and then untwining them were considered as a sign of shooting arrow from Arash’s arch.

People say this Tirgan festival is the result of not having leap years in Sasanian period. So because of the circulation of the years, beginning of the year and Nowruz occurred on summer and month of Tir. As a result, the tradition of washing on the day of Tirgan and splashing water on each other remain from those incidents.

Everybody provides their best foods on this day; variety of cookies, Halva (Kind of Iranian pastry) and nuts and also summer fruits and watermelon. All people eat from these foods and give some gifts to needy ones. It has been seen that families send trays of foods and cloths to their newlyweds. Breaking the jugs and cooking foods with wheat imply the story of Iranian blockade in Tabaristan by Turanians. So Iranian did this custom to eliminate the ominous and today it turns to happy and exciting ceremony.

Today Tirgan festival is not held in a same way as before. But it should be considered that official festivals which held in different regions aim to keep unity and solidity of the people. Tirgan festival has a close connection with water and tree in order to achieve good and fertile product. Praying the god of Tir, appealing rain for the cracked earth out of heat, eating great foods, and splashing water are all signs which can tell us that probably Tirgan is a feast of agriculture and maybe we can call it a celebration of harvest and land.

This feast is also held in Toronto in Canada and Stockholm in Sweden as well as Iran and they introduce it as “Tirgan: Festival of Rain”. Iranian and Iran lovers gather in especial area and attend in musical concerts, eat great foods, drink, and finish their ceremony with splashing water.

The story of Arash the Archer

There is not much talk of Arash in the literature of Pahlavi. But we can find more information about him in Islamic references such as “Athar Al-baqiyeh” and “Ghorar-al-seir”.

In the very old years, Iran was a fertile and vast country. So it was always in danger of malice, jealousy, and enemy’s invasion. One of Iran’s continual war was with east neighbor: Turan and its ambitious king, Turanian Afrasiab. In one of wars Afrasiab along with his army passed Jeyhoon River and invaded Iran’s territory. After some days of battle and killing the two army’s forces, finally King Manouchehr failed and was retreated. Afrasiab followed Iran’s army and after occupying many cities, steered King Manouchehr to Tabaristan. When Pishdadian Manouchehr was blockade by Turanian Afrasiab, the life became difficult for people because they did not have wheat to flour and bake bread, they just could cook unripe fruits. So the only remedy was talking.

At the end, these talking led to peace among two parties. Manouchehr asked Afrasiab to turn his territory back for the amount of shooting an arrow eastward, wherever the arrow landed both should accept as a boundary between Iran and Turan and never exceed it. Turanian Afrasiab accepted this request. The angel of Sepandarmaz appeared to Manouchehr and directed him to make an especial archery from especial wood and with especial technique. So the wood, the feather, and the iron of this archery were each provided from especial forest, iron, and tree. The archery was ready and Arash who was a proficient shooter prepared for the great duty of shooting the arrow.  “Today you are chosen to rescue Iran, take this archery and shoot the arrow with all your love and power. Maybe your love toward your fatherland, depart the enemy from this land.” The angel of Sepandarmaz told him. Arash understood that his country width and its independency depend on his power. So before preparing the arrow, he stood in front of King Manouchehr, disrobed his clothes, and showed his bare chest to people “Look! My body is in full health and there is no wound, defect, or sickness! But I am sure that when I take this archery and shoot the arrow, all of me will go along with this arrow and I will be devoted for Iran’s territory.” He said.

Next day at sunrise, Arash climbed mount Damavand with love and firm belief and shot the arrow. The god of wind came and bore Arash’s arrow away from the mountains of Ruyan, passed Khorasan, and landed it between Fergana, Tapuria, and Balkh on a walnut tree at the Jeyhoon bank. This arrow which had a sign of Afrasiab in order to be distinguished was shot in the morning and landed after passing cities, mountains, and fields in the evening. So Arash was devoted for Iran and Iran did not lose its land. The boundary of Iran and Turan was determined by Arash and this arrow. Thanks to this day, as long as the earth spins and Iran exists, Tirgan festival is held on this day and still Arash is one of Iranian popular names. So people broke their jugs, floured wheat, and kept this custom on such an especial day.

In eighth Yasht of Avesta which is called “Tishtrya yasht”, the god of rain, introduces Arash as the best Iranian shooter whom Ohrmuzd gives him strange power and Amesha Spenta helps him. In this Yasht, Tishtrya is chosen to help Arash’s arrow, and calls Arash as “Šewātīr” which means the best archer.

Over times with social and political changes, many ancient Iranian feasts and ethics are not held any more, such as Ordibehshtgan and Mordadgan, etc. But among these festivals, some of them are held in different ways all around Iran.

Some references named this festival “Tabarian Nowruz” and considered its glory as Iranian great Nowruz. In this ceremony, families and close relatives gathered in the house of family’s head with previous preparations and stayed there till late. They provided different edibles and snacks such as walnut, wheat, cannabis, orange, medlar, pomegranate, Beshtezig (Concentrated sugar syrup which is poured on scorched sesame seeds and cut into different sizes.), and sunflower seed. Head of the family read Hafez for everyone and at the end of the night they swore to Hafez’s Shakh-e-nabat (Imply Hafez’s supposed beloved)and participated in Hafez’s fortune-telling. In some regions a person named “Lalshou” entered the houses. This person who had blacked his face, did not speak with anyone, he just dabbed others with a wand. The people believed that whoever is dabbed by this wand won’t get sick till the next year. They awarded “Lalshous” with nuts and snacks. “Shal-afkani” was also seen in some regions. In suitable weather, they went to sea and swam, but usually splashing water at the riverside was satisfying.

Among Kerman’s Zoroastrians a feast called “Tirojashn” was common, which was held on second week of month of Tir. In this festival people tied rainbow-colored ribbon around their wrists on day of Tir (thirteenth day) of month of Tir and did not open it till day of wind (Twenty second day) of month of Tir. On the day of wind, they unwined the ribbon in an open area such as a mount or a plain and gave it to the wind. Young ladies took an empty jug and anyone who had an intent put something in the jug. Girls covered the jug with mirrors and put it under a tree, then in the evening they walked again with that jug and this time anyone who had an intent went to the girls and sang a song, finally the girls would offered them something from the jug. By matching the song, the intent, and the object inside the jug, they responded to their wishes. If there was a river, everyone would go to the riverside to splash water on each other, but nowadays that the river is less accessible, people eliminate their needs in cities’ big parks and with faucet, pools, and fountains.

I love Iran and it's all bout history, culture, people and tasty traditional dishes. For me travelling means learning and enjoy the right moment of travelling. 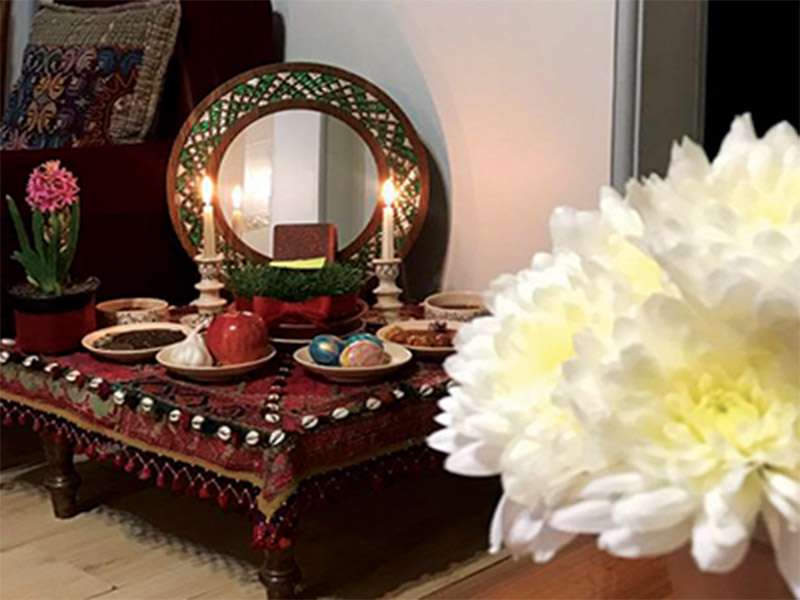